As hinted in last month's post, I have decided to change jobs (again!). When I start my new job in July, this will mark the 4th company that I've worked for in Japan in less than two years. Since moving to Japan, my work history has been much more turbulent than I intended, mostly due to COVID wreaking havoc on the world economy (and completely killing off my first employer in Japan), but also due to drastic changes in business strategy from my employers, which may or may not also be in response to COVID. Coming from the nuclear industry where I worked in the same company, same plant, same position for 4 years and knew coworkers who had been in the same position for their entire career, this is almost the polar opposite of my prior experience. Still, the fact that I can easily switch jobs despite having relatively little experience or formal training in this field is one of the virtues of working in a high-demand industry. Sure beats betting your livelihood on whether or not your megacorp will continue its success in bullying your state government into giving it extortion payments to keep your work site open.

The market continues to rise even further, with S&P500 reaching CAPE of 37.18 at month-end, which I will remind you is the 2nd highest in history (second only to the peak of the dot-com bubble in late 90's / early 2000's). Quick summary of CAPE for those who are unfamiliar: CAPE (Cyclically-Adjusted Price-to-Earnings) is a market valuation metric which augments the traditional Price-to-Earnings (PE) valuation metric by averaging the denominator (earnings) over a rolling 10 year period and adjusting it for inflation. This acts to smooth out fluctuations caused by changes in the business cycle and inflation (hence, "cyclically-adjusted"). As such, it helps to compare different market pricing periods on a more apples-to-apples basis. While it's pretty much impossible to predict market returns in the short term (< ~5-10 years), there is a reasonably good correlation between CAPE and longer term returns (>10 years), which holds across the markets of different countries. For a good in-depth discussion of this, see this post, but the gist of it can be seen in this image: 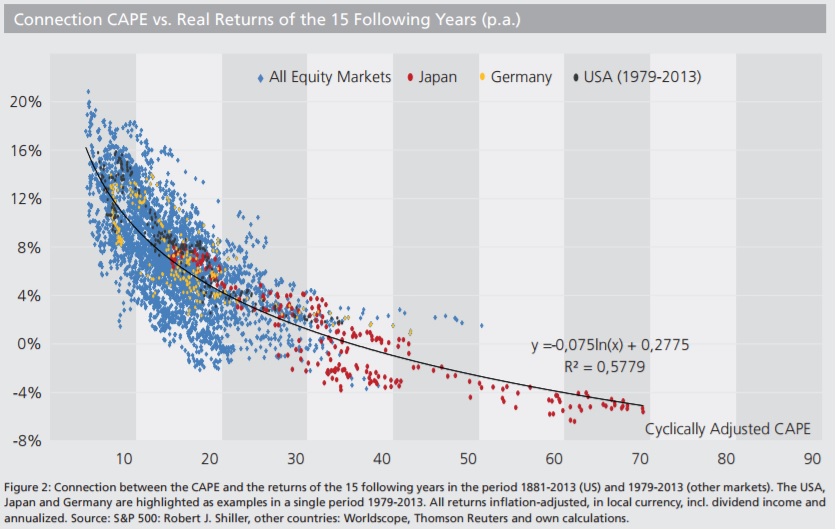 As you can see, as the CAPE increases, real returns of the following 15 years decreases. What this means is that the rapid market growth that we have consistently seen since about 2009 (about 13.3% annually, inflation-adjusted) when the CAPE as at its minimum following the Global Financial Crisis (about 15) is extremely unlikely to persist going forward, at least for the portions of investments that have been purchased at high valuations. For investments purchased at today's high CAPE, we would expect approximately zero real returns over the next 15 years if the historical data continues to be valid. Of course, since global markets have only rarely been this highly valued in the past, the reliability of the correlation decreases due to a decrease in data points, as well as an easily visible increase in variance of the available data away from the correlation line. It's hard to say if this information is actionable, but nevertheless it will be interesting to see how things will shake out going forward.

I'm sorry for updating so late. It's almost time to write my April report. So right after the March state...

I made a slight change to my investment strategy this month by changing my US small-cap value fund from Vanguard's...