I spent some time today thinking about how much water and electricity I consume. Fortunately, my utility companies are more than happy to give me that data to play with.

Here's what I found: 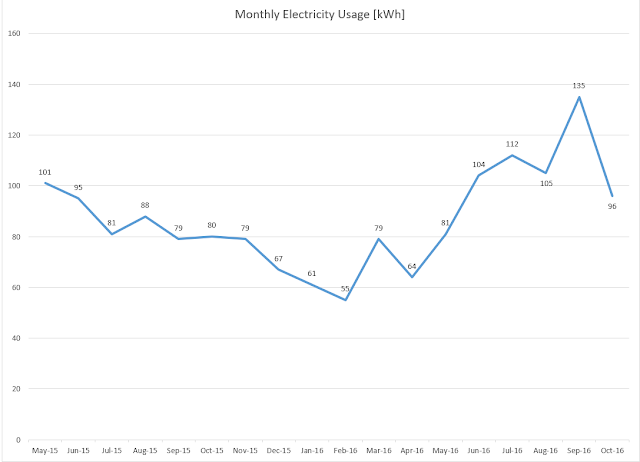 The months listed on the x-axis are the months in which my billing period begins and the period goes until the middle of the following month (for example, May actually corresponds to the period 5/15 - 6/15).

As one might expect, it tends to be a little higher in the summertime than the rest of the year, due to extra energy being used to keep my apartment cool. However, I run the air conditioner very sparingly in the summertime, instead relying on my ceiling fan and my HVAC fan alone when the air is cooler at night.

For comparison, the average American household used 10,812 kWh last year. That's over 10 times as much as I used over the same period. I live in an area with a pretty wide variety of temperatures, so it's not like I have it easier than most when it comes to weather. I'm at a loss to think of how people can use so much electricity. 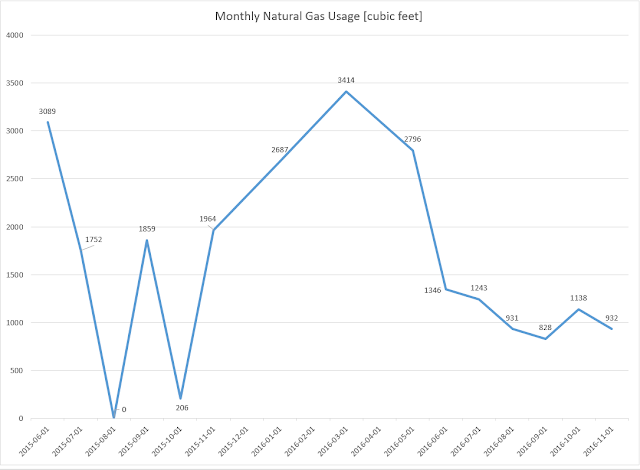 Dates are for when the meter was read by the gas company.

I'm not sure what happened in August and October of 2015, since those points were abnormally low, so I will throw them out for calculating the average usage. For all the data I have (minus the two low readings as previously mentioned), I average 1844 cubic feet per month. For the last 12 months, that average is 1728 cubic feet. So let's call it 1750 cubic feet per month, which is 21,000 over the course of a year.

At first I couldn't really find any good numbers for the average natural gas consumption in the US, but I finally stumbled upon this number: 5583 cubic feet of natural gas per month per household, which comes out to about 67,000 cubic feet per year. This is over 3 times what I use.

So the bottom line is that I have no idea what the rest of you are doing in your homes that would cause you to use 3 times the gas and 10 times the electricity that I do. Sheesh.
Previous